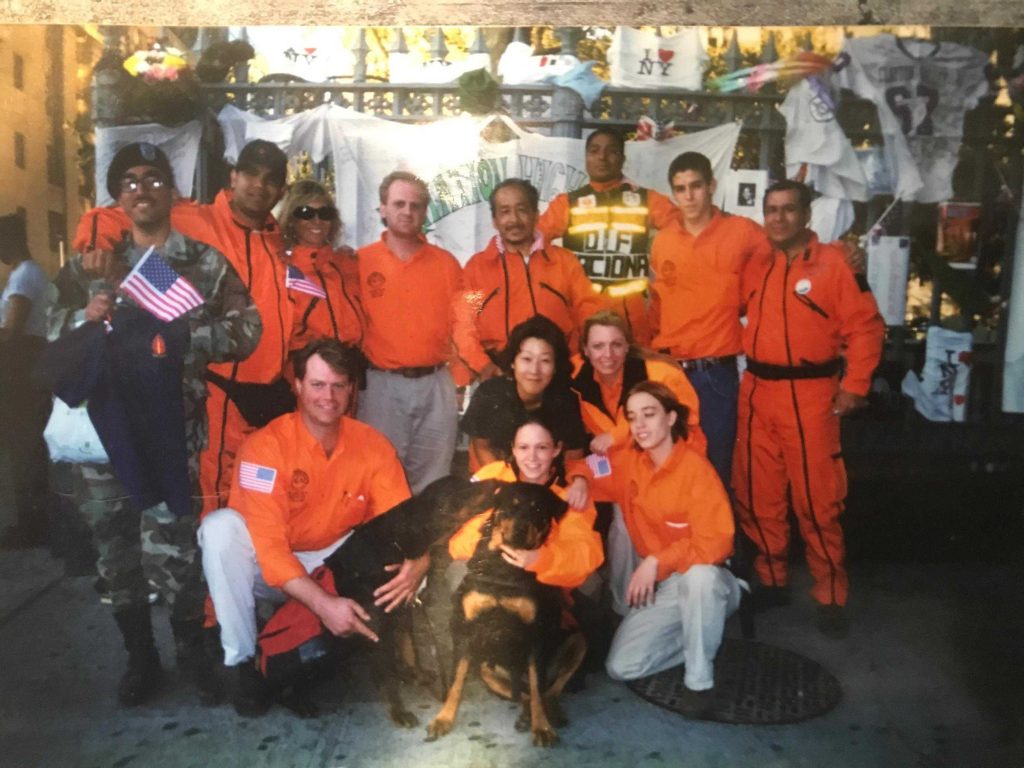 We remember all too well the unfortunate and horrific events of September 11th, 2001. A day that will live in infamy for eons to come. But hearing about some of the good things that happened during the days and weeks that followed can help to realize that there is a lot more good in this world than evil. We are very proud to have our very own in house hero here at Yost Stucco, a young man who selflessly went without question or thought for his own wellbeing, into what looked like a war zone, for the purpose of rescuing buried survivors.

Josh Ronnan was only 16 years of age on that fateful morning. A young man like many others with one small difference, he had an amazing relationship with his dog Neila, a calm and devoted three-year-old Rottweiler. He could teach her to find just about anything, but he never imagined that he would be teaching her to find human remains in the rubble of the World Trade Centers.

Josh arrived at ground zero at 1 am on September 12th, and was quickly briefed at the sobering reality of the situation. What he thought was going to be a rescue mission, was sadly not to be… This was a recovery effort, and it wouldn’t be pretty. I will save you from the details, but I will paint a brief and moving picture by telling you that Josh and his team were not given stretchers to extract their finds, instead they were provided with buckets. What a weight to be placed on such young shoulders, unimaginable responsibility, few of us could have dealt with such an environment, but this young man rose to the occasion.

Josh was part of a 6 person team put together by the president of the American Canine Association. Known for his special relationship with Neila, Josh was immediately selected to be part of the team. Working in terrible conditions for long hours, Josh and Neila would take short nights, sleeping side by side on a makeshift cot on the floor of St Paul’s Trinity Church. After a few days, whilst onsite, the president of the American Canine Association approached a very dirty and tired Josh, handed him a cell phone and said: “somebody wants to talk to you”. Josh held the phone to his ear and said questioningly “Hello?”, and he heard back the voice of President George W Bush say “I want to thank you personally for your service to this country, I have heard about the task you are carrying out, and the conditions that you are enduring and I want you to know that we will be putting you into a hotel for the remainder of your time there”. How many people do something in their lives to not only get the attention of the President of the United States of America but something so momentous as to implore the President himself to pick up the telephone and call you personally?. This alone points to the enormity and importance of the job Josh and Neila were carrying out.

In the weeks that followed, Josh and Neila would witness first hand the love and generosity of the American people. Walking through the streets coming and going from the now restricted area that was ground zero, he would be cheered and applauded every step of the way. Strangers would approach him and Neila and give them food, hand them drinks. After a hard long day searching through the mountains of rubble, strangers from the public would grab him, force him to sit and take a break whilst they massaged his tired muscles. These people did whatever they could to help him and let him know he was making a difference, he was appreciated.

Together, Josh and Neila worked hard and diligently, finding many, many remains which would eventually bring closure to numerous grieving families. One year on, Josh and Neila were invited back to ground zero, to stand on stage as the names of the 2996 victims were read aloud… That is still hard to say, 2996 lives, such a worthless act to take so many innocent people. Sadly Josh and Neila’s efforts came at a high personal price. Neila developed cancer from the contaminants in the air whilst digging through the rubble, she would give up her life just 2 years after their heroic efforts. A time that wasn’t easy for Josh as I am sure you can see.

Josh today is a fine young man, and I am proud to have him as not only an employee here at Yost Stucco, but as a personal friend. Please join me in letting him know that his actions in those dark days past were indeed heroic and something of which he should be very, very proud.

Thank you, Josh and Neila.

How Do You Maintain a Stucco House?

Maintaining a stucco house is a lot easier than you may think, providing that the stucco was installed correctly (and many were not) with all the required flashing details, drainage, and expansion joints.

What Are the Advantages of Stucco

There are many advantages of having a stucco facade, durability, versatility, and beauty to name just a few. Stucco is made from cement, and is therefore inherently durable and will outlast many other siding options. You don’t have to worry about children hitting a baseball against it, or hail storms damaging it. Stucco will stand up to almost anything you throw at it.

We are sure by now you have heard about some of the negative reputations that stucco has developed over the last decade or so. But is this reputation deserved? The simple answer is no, but let us delve a little deeper into the subject and you will see for yourself the positive and negative attributes that stucco has to offer.

Thinking about resurfacing your stucco home? This could be a great way to revitalize the look of your house, or it could be covering over way bigger problems. Things to know before you get your stucco resurfaced. What is the stucco applied to? If you have stucco over...
Read More

Stucco problems can come in many forms, from unsightly cracks and bulges, to internal water damage to hardwood floors and moldy and decaying floor joists.  But not all stucco problems necessarily mean costly repairs. Some stucco issues can be minor and require minimal...
Read More


Call to Book an Appointment

If you have questions or concerns with the stucco outside your home, call us today. Our friendly trained and qualified inspectors will examine the exterior of your home and provide you with available options and resolutions.